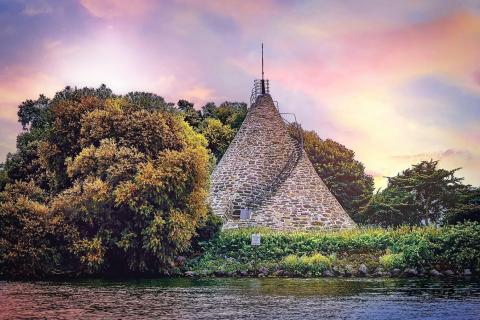 THE COUNTIES, Ontario - The cultures and identities of Indigenous peoples are rooted in the land, and honouring connections to place is an important part of reconciliation. Working together towards a renewed relationship, today, the Mohawk Council of Akwesasne, the Township of South Glengarry, and Parks Canada announced they are collaborating on a common vision for conserving the natural and cultural heritage and sharing the stories of Tsikatsinakwahere, or Cairn Island.

Tsikatsinakwahere, or Cairn Island, is a small, acre-sized island in the St. Lawrence River, and is part of the traditional territory of Akwesasne. Its traditional name refers to the shape of the ground that resembles a bird’s nest. In the 1920s, Cairn Island was designated a national historic site for the large monument built on the island in 1842 commemorating service in the Upper Canada Rebellion. The island was frequented over the years by generations of visitors and local residents. In the 1990s, out of respect for the territory and recognition of the cultural significance of the island to the Mohawks of Akwesasne, the island was closed to visitors.

Recognizing that Cairn Island holds meaning to all of its past users, the partners are committed to ensuring Indigenous connections and cultural significance of the island are honoured and Indigenous rights are respected. Through shared understanding and mutual respect, presenting the story of the island and the different perspectives on its history is part of the path toward reconciliation.

The Mohawk Council of Akwesasne, the Township of South Glengarry and Parks Canada are committed to preserving the island in its current natural state and sharing its historical significance. They will develop publicly accessible interpretive materials supported by Parks Canada. By ensuring that the history of Cairn Island is told, Canadians will have an opportunity to learn more about important periods of our past and enrich the understanding of ourselves, each other, and our country.

“Cairn Island holds cultural and sacred significance to the Mohawks of Akwesasne and our ties to the lands are very strong. Our People’s historical connection to Tsikatsinakwahere has entrusted us with the responsibility to protect and preserve it. We recognize the historical significance that the Glengarry Cairn monument has with our South Glengarry neighbours and our Mohawk community is committed to ensuring the protection and presentation of the island for future generations.”

“The rich history of Glengarry Cairn National Historic Site and Cairn Island / Tsikatsinakwahere holds real and meaningful significance for the communities of Akwesasne and South Glengarry. Parks Canada is proud to walk the path towards greater reconciliation and renewed relationships with Indigenous peoples, based on a recognition of rights, respect, collaboration, and partnership, and we welcome the important steps being taken by the local communities. Honouring the cultural connections to Cairn Island will bring people together, inform new perspectives, and allow future generations to learn about and experience the island's rich heritage.”

“Although the Glengarry Cairn is a culturally significant marker for residents of the Township of South Glengarry, the Township recognizes the historical and sacred significance of Cairn Island to the Mohawks of Akwesasne. We look forward to continuing to work together with Akwesasne to continue to share the history of the Glengarry Cairn and educate the public on the importance of returning Cairn Island to the stewardship of the Mohawks of Akwesasne.”