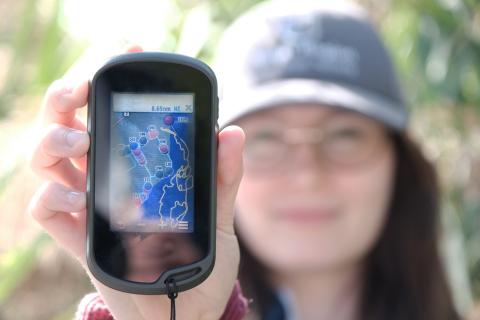 While the Marsh is a well-known haven for native biodiversity, some areas in the provincially significant wetland are dealing with tenacious newcomers.

“Phragmites australis is a common sight in this part of Ontario,” says RRCA’s Outreach and Stewardship Assistant, Jamie Would, who conducted the survey throughout the summer. “Most of us have observed them while driving: thickly-packed, tall clumps of grasses, topped with tufted ends, which thrive in wet environments such as roadside ditches.”

Patches of phragmites have taken a stubborn hold in some of the wet, near-shore sections of the Marsh, while buckthorn, originally introduced from Europe as an ornamental shrub, is claiming territory on drier ground. Besides simply taking up physical space, phragmites and buckthorn also alter the chemical composition of the soil, making it unsuitable for other plants such as native bullrushes and sedges, wild rice, trilliums, and jack-in-the pulpit, to name a few.

“Conducting this invasive species survey is a first step towards controlling the spread of phragmites and buckthorn in the Marsh,” says Would. “It will allow us to assess various options for removing and replacing them with a diversity of native plants which currently cannot compete.”

The addition of more diverse, native plants will, in turn, provide additional food and habitat for the Marsh’s wildlife.

Maintaining, protecting, enhancing, and restoring areas such as Cooper Marsh is a key part of the RRCA’s mission. To date, the RRCA conserves 1,644 acres of environmentally significant land.